Posted on July 31, 2013 by davesdemolitiondiaries 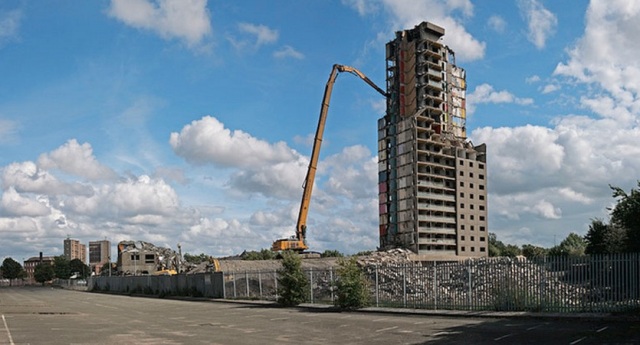 One of our high reach machines in action at Boomloan Court, Glasgow

Coleman & Company we were now very active in land reclamation, clearing sites, demolishing differing structures, demolishing high-rise blocks and preparing sites prepared for the more socially acceptable low rise buildings. This led us to purchase larger machines the first in 2004, a Hitachi 850 High Reach capable of demolishing 40m high structures. We also bought the Excavator equipment for this formidable machine. Contracts were secured for demolition works in the City of London at Westminster Bridge, also in the Financial Quarter in the shadow of the highly visionary Gherkin, also at Pollockshaws in Glasgow, in Edinburgh, in Peebles, in Cardiff in the shadow of the Millennium Stadium. The Cat 350 and the Hitachi 850 were the death knell to many structures, Villiers House, Cross House, Ranleigh House, Donnay House, Nettleton House, Beatty House, Jellicoe House to name a few of the ones to be gradually nibbled away, to be loaded up and off for recycling into construction aggregate, and another life. We had a quality fleet of plant for high reach demolition, tower block demolition and industrial demolition.  We were now a truly national demolition contractor with an extensive C.V. to its credit.

Even with our wide array of plant and equipment some buildings needed to be debuilt and dismantled by hand, due to local environment. Two such blocks were the twenty storey Alma House and Leys House, Darlaston both on a restricted site with high voltage cables situated between the two blocks, as is usual, with most high rise blocks, they were in a built up area, consideration of all these obstacles and difficulties removed any ideas of explosive demolitions.  A tower crane was erected on site between the blocks; the crane needed to be on piled foundations that had to be constructed either side of the High Voltage cables. The blocks then dismantled in the reverse order of construction reducing in height, floor by floor, both at the same time, thus keeping the crane fully employed. The concrete panels were pulverised at ground level then removed off site. Once the buildings had been reduced to six storeys the Cat 350 high reach machine was bought onto site to complete the demolition of the blocks to the delight of the local residents. Mark Carless, now Colemans Contracts Director, who, at the time, had no head for heights, was put in charge of the project; he did it well, soon becoming acclimatised as the contract progressed. Peat House in the centre of Birmingham was another extremely difficult `debuild`, a six/seven storey building occupying a complete corner site with neighbouring buildings housing solicitors, estate agents and other professional bodies, who do not accept any interference with their daily routine, all demolition works were required to be done without the nuisance of dust, noise and disruption!

Why not learn more about our high reach demolition services by reviewing the projects we completed at the Queen’s Medical Centre in Nottingham and Ravensworth Court in Gateteshead?