Good to give something back

Posted on February 27, 2013 by davesdemolitiondiaries

In 1977, my Father heard of a story about The Birmingham Women’s Hospital that wanted to retain a cancer machine that they had been trialing which had proven to be a great success. Dr Joe Jordan led an appeal to see if the necessary funds could be raised. After a family discussion, with everyone agreeing that we should buy and donate the machine to the Hospital. It was with great pride that my Father and Mother who came to Birmingham with little more than hope and a very strong will to succeed handed over a cheque for the hospital to buy and retain the machine they so much wanted. My Father always said “This Country has been good to us, it’s great to be in a position to be able to give something back!” 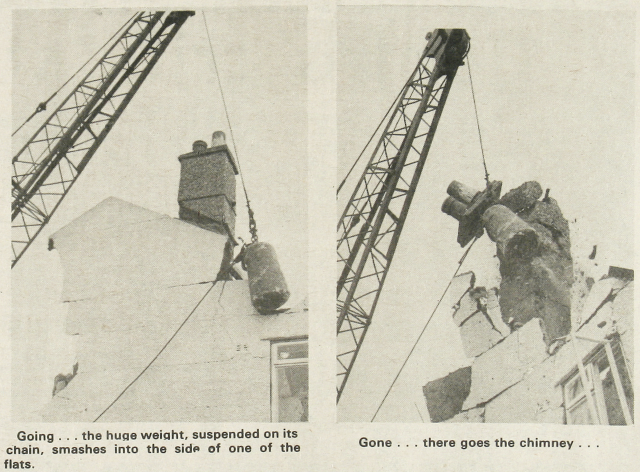 The old ball and chain powered by the RB22 would not be considered a primitive and potentially dangerous combination but no one could argue with its effectiveness. An iconic demolition tool

The demolition of the Curzon Street Waste Incinerator Plant, was for Tender through Birmingham City Council, we were successful with our submission, a major works taking many months to complete, the site contained one of the largest brick chimney`s in the Midlands, J. Lacey Steeplejacks Ltd., reduced the height to enable 22RB with 60ft jib, (the old digger and ball) to complete the chimney demolition works, the work was good and varied, many differing types of buildings and construction, were encountered much of it new to us. This project was then on our Company C.V. for when the Witton Incinerator was later shut down, in readiness for demolition, we were also successful in securing that particular contract, our extensive Company CV, the large and varied range of activities and equipment were highly complementary to our Tender submission.

The Witton Incinerator Demolition was a much more complicated project, it consisted of many varying heavily reinforced mass concrete structures on post tensioned beams and driven piled foundations, all which were to be carefully dismantled and removed as part of the scheme, thinking caps on, as we were to encounter formidable construction that we had never previously experienced, neither had the industry so we had nowhere to go to seek guidance or advice. Needless to say the project did over run, our employers, the City Council, were understanding and accommodating but none too generous in assisting us to cover the additional costs and expense. 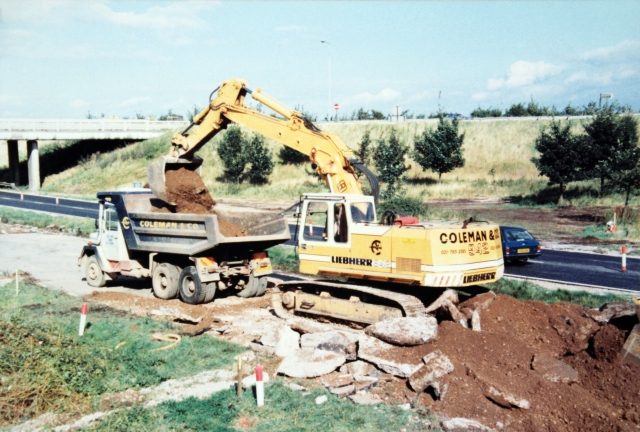 One of our “Maggie” Deutz trucks being loaded by our Liebherr 942 next to the A38 in Burton-On-Trent.

The motorways were by now being rebuilt, Motorway Reconstruction Lane Rental Schemes were offered to us, as is the Coleman way we gave it a try, very hard work on the men and machines, we purchased Liebherr 942 LC as lead machine, a rugged 45 tonne excavator, that performed well without fault for 7 days a week, 24 hours a day. Non completion on programme carried massive penalties all for very little reward; this was not an activity that we wished to pursue for obvious reasons.

If you would like to learn more about the plant Coleman & Company use nowadays please look here. We’ve moved on quite some way from the ball and chain!

I’m also very proud to say Coleman’s history of caring for the community (now termed “Corporate Social Responsibility“) is as strong as ever during our 50th Anniversary year in the forms the cornerstone of our Triple 50 initiative (my son Mark’s idea!).