Posted on January 23, 2013 by davesdemolitiondiaries

It was about this time that we changed banks from Lloyds in Sutton Coldfield to the newly established Allied Irish Bank, who are still our Bankers, who have over the years been very have proved to be supportive of one of their first clients in the Midlands. 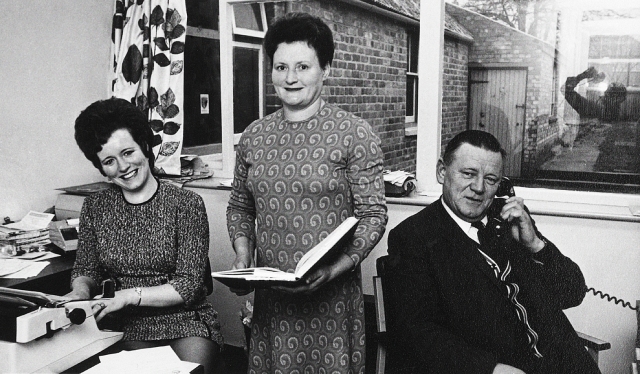 The home office (later to become the grand children’s table tennis room) in 1970 with Maureen, Nora and John Coleman.

My sister Maureen, joined the company in April 1969, to help out in the office with accounts, our dear Mother could not cope with the ever increasing demands and work load of book keeping, typing, wages, answering the phone as well as being a domestic engineer masterminding all and looking after a hard working husband coupled with the demands of a growing family. Coleman & Company (Plant Hire) Ltd. was now a real family firm, embracing all the values of such.

The 1970`s everything appeared to be changing, what we had learnt at school was all to be changed. February 1971 our Pounds, Shillings, and Pence were to disappear. 12 Pennies in a Shilling, 20 Shillings in a Pound was to become 100 Pence in a Pound. Therefore our 6 Pence became 2.5 New Pence, a Shilling became 5 new Pence, a 2 Shillings became 10 new Pence and the old half crown was to disappear. It was difficult for everyone, and then within 2 years our Imperial Measures were also to disappear! Our Inch, Foot and Yard were to become Millimetres, Centimetres and Metres.

At this juncture in time my Father stopped pricing work, it was all too much for him to take in, too confusing. We priced work together he would give me a price  (in old currency) per Cubic Yard expecting me to work out the price in new currency per Cubic Metre, needless to say, mistakes were made – always my fault – so I decided to take on the responsibility of pricing of the work, of course my Father would pile up all the work for me, my social life was forgotten, a non entity. I would price a Schedule of Rates then my Mother would extend the rates to arrive at a Contract Sum. 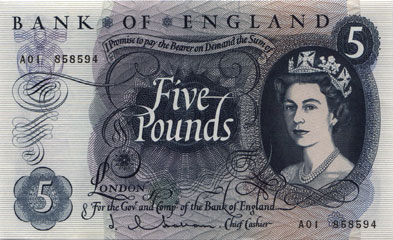 A “Series C” £5. I’ll never forget what one of those looks like!

The system seemed to work well, until the inevitable happened. I had priced for the demolition and excavation works that was to be followed up by a separate visit for a substation demolition, once the new substation had been constructed and commissioned, all as part of a Town Centre Development in Burton on Trent by John Laing Construction. For the separate visit that was required, I wrote 500 in the Pound column, my dear Mother, in trying hard to get used to decimalisation, interpreted this as £5:00. No one realised the innocent mistake that had been made.  We had successfully completed the first phase of the works, and then once the new buildings had been constructed, we were returned to site to demolish the Sub Station. On looking through the Bill we then realised our mistake, Laing agreed a mistake had been made, as a good will gesture they offered to give us what they had in their Rates, we were all dismayed to see that Laing had the princely sum of £5:25. Coleman`s went back to site to demolish and clear away the Sub Station all for £5:25 Lump Sum. Needless to say the “Boss” had completely lost his `sense of humour`, he just couldn`t understand how such an obvious mistake could have been made!

To learn more about our 50 year history click here.

This entry was posted in Demolition, Family Business. Bookmark the permalink.