We were starting to motor

Posted on December 12, 2012 by davesdemolitiondiaries

Business had continued to steadily progress and expand carrying out many differing demolition and excavation works; we were now also hiring out the plant and equipment. New Motorways were to be built, we received an opportunity to tender for the demolition, site clearance and foundation removal works for the new M6 from Gravelly Park, the site of Spaghetti Junction (completed 40 years in May 2012), upto and including the M5 to Cakemore, Rowley Regis and Quinton. 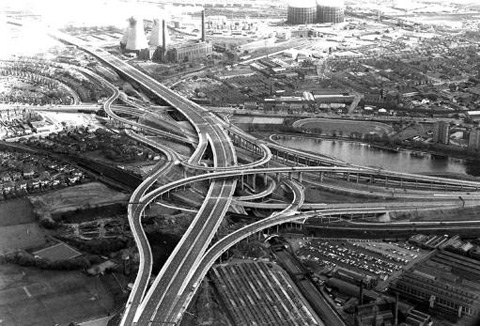 We secured the contract, comprising of the demolition of two storey houses in Smethwick and Oldbury, factories, industrial properties in Oldbury, and West Bromwich, including the Chance Bros Glass Works also heavy works in the I.C.I. Oldbury, to Rowley Regis, where we were to work through the Shell Fuel Storage Depot, all working under the ever watchful eye and control of Consultant Engineers, Sir Owen Williams and Partners.

All sections of the project were a challenge, none more than a double hip roofed nine storey brick building in Chance Bros that had very restricted access, it was all hand work strip out and demolish. The building was completely stripped, by hand, of roof, all timber floors and joists that were sold for reuse, cross beams and one set of stairs remained. The walls were reduced by hand – top down – standing on the walls that were being demolished which thickened from 9” (225mm) to 3ft (1metre) as they went top to ground, starting at about 120ft (36M) high, there was no room to erect scaffolding, the men knew what they were doing, I have never heard of any incidence of operatives falling off the walls that they were demolishing by this method, with care not carelessness was the way we worked.

We decided to buy our first hydraulic excavator, a new concept, the beginning of the end for roped machines. The Hymac 580, this machine could reach two story buildings, and then dig out the foundations, or so we thought, a new concept and we expecting too much created many problems, these were overcome as our knowledge of the machines capabilities grew.

The classic ball and chain. A rudimentary but highly effective demolition tool. We now use remote control excavators controlled by our operatives from a safe distance. How times have changed.

The faithful 22 RB (digger and ball) was called into service, not that it ever really went out, in the I.M.I., at Oldbury, on the line of the new M5, the underground structures were so heavy that Coleman used explosives for the first time, under the guidance of Quarry Explosive Engineer, Norman Cull. The works were all completed in about 18 months, as I recall, without accident or incident. The progression of the contract saw new larger machines purchased, the older smaller ones replaced.

To learn more about our demolition services click here.

This entry was posted in Demolition, Earthworks, Industrial Demolition. Bookmark the permalink.